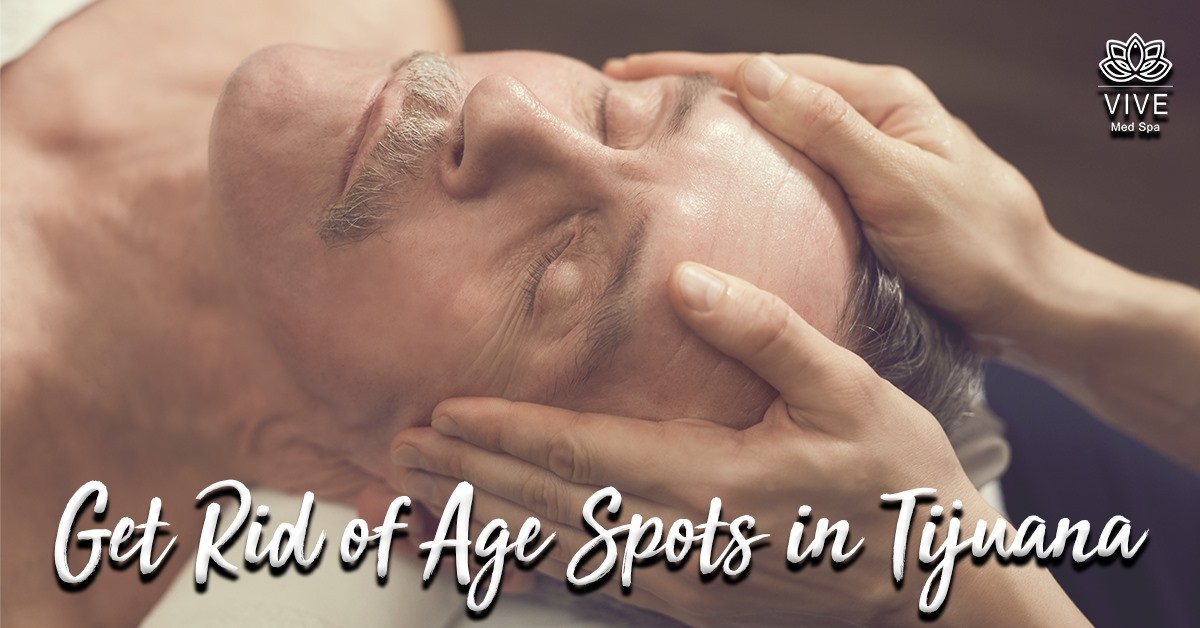 Come to Vive Med in Tijuana to get rid of age spots, those dark areas in the skin, mainly in hands and face. Consult our medical team, trained in non-invasive esthetic treatments, to give you the most beautiful results.

Eliminate those disturbing signals of age that bother you in social interactions, business, work, and everyday life.

Why do they appear?

Age spots on the skin appear when the epidermis changes the production of melanin, the substance responsible for skin coloring.

Melanin determines the color of the skin, so its lack or excess in some areas of the body, mainly the hands and face, generate permanent spots.

Melanin production depends on the stimulation by the sun, that’s why the spots usually appear in the most exposed areas of the skin.

Generally, they have an appearance like the freckles, but of greater size, of dark brown or black, and they appear in flat zones of the skin.

It is a condition linked to the passage of time and exposure to the sun. However, there is no specific age for them, as sometimes they can appear early in life, around 40 years or less, including teen years, and for most people, they can appear later.

Spots on the skin is a natural consequence of exposure to the sun, and the loss of melanin, the substance that gives the skin its color.
It can be Freckles or Age Spots.
For many people, age spots may cause discomfort for aesthetic reasons, although they do not represent any health risk.
The cause is the failure of the skin's pigmentation, which results in the appearance of colored spots ranging from yellow, orange, light brown, or black.
They appear mainly on the hands, although they may also be on the neck, shoulders, back, and even legs.

The options of treatment

You can eliminate dark spots in the skin using several kinds of lasers beam. Depending on your condition, the doctor may recommend one of them.

Laser treatment burns the dark points under the skin, generating new skin and the production of collagen and elastin.

Among the most effective laser to use is CO2 therapy. A beam of laser that modulates the heat to reach the level of the skin where the melanin acts.

The Intense Pulsed Light laser (IPL) is another option, which targets melanin and removes the dark spots.

An alternative to treat dark spots on the skin is Microdermabrasion, which consists of the use of a tool with an abrasive surface that helps to remove the outer layer of the skin.

In this case, the objective of the treatment is to reach the superficial layers of the skin, generating collagen and new tissues on the area of application.

The Chemical Peel treatment involves applying a cream to the skin for exfoliating the surface. That leads to new skin growth and gradually may disappear dark spots on the skin.

Get shapely legs in Tijuana!

Get a perfect skin with CO2 Laser

Change your nose without surgery

Get an slim waist now in Tijuana